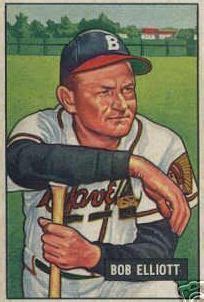 Robert (Bob) Irving Elliott was a third baseman and right fielder who played most of his career with the Pittsburgh Pirates and Boston Braves (1947-51). He also briefly managed and coached in the Majors. Born in San Francisco, California on November 26, 1916, the right-handed batting and throwing Elliott stood 6 feet tall and weighed 185 pounds.

Elliott contributed some of the happiest memories to the Braves’ final Boston years, winning the 1947 National League Most Valuable Player Award and earning the nickname “Mr. Team.” The following season, his power hitting helped lift Boston to its second National League pennant of the 20th century, the team’s first in 34 years, and last before relocating to Milwaukee.

He was the second Major League third baseman to have five seasons of 100 runs batted in, joining Pie Traynor, and retired with the highest career slugging percentage (.440) of any NL third baseman. He also led the National League in assists three times and in putouts and double plays twice each, and ended his career among the NL leaders in games (8th, 1262), assists (7th, 2547), total chances (10th, 4113) and double plays (4th, 231) at third base.

After the 1946 season with Pittsburgh, he was traded to the Braves in a lopsided deal for 37-year-old second baseman Billy Herman, a future member of the Baseball Hall of Fame who was named Pittsburgh’s playing manager for 1947. But Herman was aghast at the cost — Elliott — the Pirates had paid for him. “Why, they’ve gone and traded the whole team on me”, he said. Herman played only 15 more Major League games and the other three players made a total of 127 appearances with the Pirates.

On September 30, the day after the end of the season, the Pirates traded Elliott to the Braves along with Hank Camelli in return for Billy Herman, Elmer Singleton, Stan Wentzel, and Whitey Wietelmann. Even though Herman would later go on to manage in Pittsburgh, the trade really did not benefit the Pirates on the field, as Herman played in only 15 more major-league games and the other three players appeared in a total of only 127 games for the Pirates. For the Braves, however, it proved one of the best swaps in team history.

According to Al Hirshberg: “[T]he Pirates had two ball players who interested the Braves to no end. One was Ralph Kiner, a rookie outfielder whose 23 home runs led the National League in 1946 and who gave every indication of being well on his way towards fame and fortune.… The other Pittsburgh ball player who intrigued the Braves was Bob Elliott.… Of the two, Southworth’s first choice was Elliott, in spite of the slugging potentialities of the youthful Kiner. The Braves manager was thinking about the empty hole that would be left at third base with Herman gone. The Pirates didn’t want to give up either of their stars.…. [The Braves brain trust] pointed out that the big Californian wasn’t happy in Pittsburgh, which was true.….

“Finally, they got right down to cases. ‘Herman and who…do you want for Elliott?’ ‘An infielder, an outfielder and a pitcher,’ came the reply…. ‘We can use a spare catcher,’ commented Southworth. The boys finally agreed on a deal.… In return for [Herman] and a half dozen nondescript ball players, the Braves acquired the classiest third baseman in baseball.”

In spite of his success with Pittsburgh, Elliott, as Arthur Daley put it, “never did reach his full potentiality until he was traded from the Pirates to the Braves.” Daley wrote that Southworth reportedly started envisioning a pennant when Elliott joined the team, and he made a point of motivating his new third sacker:

“‘You’re a very fine ball player, Bob,’ [Southworth] told Elliott. ‘You can make all the plays you’re supposed to at third base. You have an excellent arm. You run the bases well and are a dangerous long-ball hitter. All you need to achieve true greatness is the added sparkle of more hustle. If you hustle, I’m absolutely convinced that you will win the most valuable player award this season.’

“Elliott hustled. He won the most valuable player award. That was 1947 and the lift he gave the Braves spurred them to the pennant the following season.” In fact, that reputation for hustling stayed with Elliott. After the 1953 season, Chicago White Sox GM Frank Lane called Elliott “one of the greatest hustlers I ever saw. Bob played every game as if the championship hinged on it.”

With a friendlier hitting environment at Braves Field, Elliott exceeded the 20 home run mark three times in his five years in Boston, equalling Whitey Kurowski for the most 20-HR seasons by an NL third baseman. In his 1947 MVP campaign, Elliott did not lead the NL in any offensive category; however, he batted .317 (second in the NL), with 22 home runs and 113 runs batted in, all team highs. In 1948, when the Braves won the pennant, Elliott batted .283 with 23 homers and 100 RBI and made his sixth All-Star team. He also led the Major Leagues with 131 walks, breaking the club record of 110 set by Billy Hamilton in 1896; it remains the franchise record. Batting cleanup, he hit .333 in the 1948 World Series, which Boston lost in six games to the Cleveland Indians; he had a pair of home runs in his first two at bats in Game 5, an 11-5 victory, and was 3 for 3 with a walk in the final 4-3 loss in Game 6.

Although his numbers declined somewhat thereafter, Elliott enjoyed productive years from 1949 through 1951, including a season batting .305 with 24 HRs and 107 RBI in 1950, his sixth 100-RBI campaign. He was named to his last All-Star squad in 1951, his final year with Boston. By the early 1950s he had broken Kurowski’s NL record for career home runs at third base, though Eddie Mathews surpassed him within a few seasons.