I love opening day. It is always a time of hope. Some years it starts well. Some years it doesn’t. This wasn’t a good day for the Braves but I have hope regardless. It is a long season. Philie is looking good. That worries me.

If it felt a little like 2008 on Thursday afternoon at Citizens Bank Park, it looked like it on the scoreboard, too.

Bryce Harper has sparked a baseball renaissance in Philadelphia, creating excitement and expectations not felt on Pattison Avenue since Jimmy Rollins, Chase Utley and Ryan Howard mashed home runs, won division titles, pennants and a World Series championship from 2007-11. Harper had the sellout crowd in a 10-4 victory over the Braves on Opening Day buzzing before first pitch. He got standing ovations. He bowed to his supporters in right field. He wore a pair of impossible-to-miss green Phanatic cleats.

“I think the whole team felt it; just the energy there was in the ballpark today,” Harper said.

“In [Thursday’s] game, where we were, the big thing is to go out and get ahead of hitters and try to keep the game there for the guys to come back,” Snitker said. “It just didn’t work out.”

Making his sixth consecutive Opening Day start, Julio Teheran handed a 3-1 sixth-inning deficit to Carle, who issued a pair of walks before delivering an elevated 3-2 fastball that Maikel Franco tomahawked into the left-field seats for a two-out, three-run homer.

Matt Joyce cut the deficit to 6-3 when he came off the bench to homer in his first at-bat as a Brave. But thoughts of his two-run shot stirring a rally quickly dissipated when Jackson issued a leadoff walk and committed a throwing error that led Snitker to intentionally walk Bryce Harper ahead of Rhys Hoskins, who drilled a 1-0 fastball into the left-field seats for his first career grand slam.

“Everybody has got good stuff,” Braves catcher Brian McCann said. “It’s about getting ahead [of hitters] and staying ahead.”

Given his best credential is being out of options, Jackson probably shouldn’t have been placed on the roster, let alone provided a chance to pitch in what was still a winnable game. But until Minter returns, Vizcaino creates some confidence about his health and the inexperienced relievers prove themselves, this bullpen will remain more than a Craig Kimbrel away from being reliable.

Teheran’s slider: Teheran used his slider a career-high 42 percent of the time as he limited the Phillies to three runs, while notching seven strikeouts over five innings. The slider accounted for eight of the first nine pitches thrown to Harper, who went hitless as he was unable to extend his dominance of the Braves’ veteran starter.

Harper struck out against a fastball to end a perfect fifth and he whiffed on a two-strike slider after Dansby Swanson’s throwing error put Jean Segura on second with no outs in the fourth. Consecutive strikeouts of Harper and Hoskins put Teheran in position to escape the inning unscathed. But Odubel Herrera chopped a low fastball up the middle to score Segura and Cesar Hernandez followed by hitting an off-the-plate changeup the other way to give the Phillies a 3-1 lead.

“When you get those kinds of swings and they still get a base hit, there’s nothing you can do,” said Teheran, who retired nine straight after his first-inning troubles were extended by Andrew McCutchen’s leadoff homer.

Bench power: Joyce needed just one at-bat to equal the extra-base hit total Adam Duvall recorded in 53 at-bats with the Braves last year. Joyce’s two-run, seventh-inning homer off Hector Neris showed why the Braves took a chance by acquiring him from the Giants on Saturday to fill the bench role previously earmarked for Duvall before he was sent to Triple-A.

Summing it up: “The only thing today means is we can’t go 162-0. It’s just one game. It’s no big deal. I’m pretty sure the Boston Red Sox lost their Opening Day game last year and they turned out all right.” —

But it was the Phillies’ rebuilding holdovers that stole the show, and maybe gave National League pitchers a little bit of a panic attack regarding their collective futures. Because after new Phillies left fielder Andrew McCutchen smacked a leadoff home run in the bottom of the first inning to hand his team a 1-0 lead, Odúbel Herrera, Cesar Hernandez, Maikel Franco and Rhys Hoskins drove in the team’s remaining nine runs.

Herrera, Hernandez and Franco spent much of the past few seasons as three of the Phillies’ top four hitters in the lineup. They hit sixth, seventh and eighth, respectively, Thursday.

Herrera hit a go-ahead, run-scoring single in the fourth inning. Hernandez followed with another single to score another run to make it 3-1. Franco crushed a three-run homer in the sixth to make it 6-1.

“Our eight-hole guy hit a three-run homer,” McCutchen said. “It just shows you how deep the lineup is. Franco, he’s not an eight-hole hitter. Not the typical one. It just shows you what we can do, one through eight. Yeah, we can do it on a daily basis. It’s not going to be one or two guys that’s picking the team up, we’re going to picking each other up because we have that type of lineup to do it.”

After an intentional walk to Harper loaded the bases with no outs in the seventh, Hoskins crushed his first career grand slam to left field.

Something similar happened in Harper’s spring debut on March 9 in Clearwater, Fla. Harper walked and Hoskins followed with a two-run homer.

“Get used to that,” Harper told Hoskins as they returned to the dugout on that sunny afternoon at Spectrum Field.

Who knew he meant it would happen again on Opening Day?

Who knew it’d be a grand slam?

“It’s scary good,” Hoskins said about the Phillies’ lineup. “There’s just not a deep breath, there’s not a breath of fresh air for the opposing pitcher. They decided to walk Bryce tonight. Sometimes they’ll walk him and they’ll walk me and then you have to face J.T. [Realmuto]. 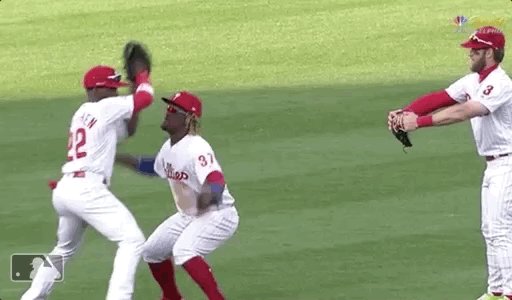 You walk Cutch you have to face [Jean] Segura. You walk Odubel you have to face Cesar and than Franco. I think we saw it the whole game from everybody in the lineup. Everybody had great at-bats and it’s pretty contagious.”

It was the Phillies’ biggest margin of victory on Opening Day since Roy Halladay pitched them to an 11-1 victory over the Nationals on April 5, 2010, at Nationals Park.

No National League team scored more runs than the Phillies (3,996) from 2007-11. That team not only had Rollins, Utley and Howard, it had Jayson Werth, Shane Victorino, Pat Burrell, Raul Ibanez and Carlos Ruiz.

They had tough outs one through eight. It looks like this team does, too.

“It’s just devastating for an opposing team,” Realmuto said about this team’s Nos. 6-7-8 hitters. “I know as a catcher that when you have 6-, 7-, 8-hole like those three, that’s tough. Those are middle of the lineup guys and they’re hitting in the bottom of the order. It gets on you as an opposing staff. There’s really no hole in the lineup.”

Aaron Nola was the story on Opening Day 2018, when Kapler pulled him after just 68 pitches in Atlanta, despite holding a five-run lead in the sixth inning. The Phillies’ bullpen squandered the lead and lost the game. Kapler promised this spring that this season opener would be different.

Nola walked a career-high five batters in six innings, but Kapler let him work out of trouble in the sixth. Nola had just walked Ronald Acuna Jr. with two outs, putting him at 98 pitches. But Nola got Nick Markakis on the next pitch to pop out in foul territory to end the inning.

“Two totally different starts,” Nola said. “I was cruising through five to 5 1/3 [innings] last year and I really wasn’t cruising as much today. I threw more pitches, but I wanted to finish that inning and keep the game as close as possible. That’s my job every time I go out, and I think Gabe and I had a talk last year after Opening Day and he let me go and I got to my goal.”