1906 would be a year of lasts for the Beaneaters. With a 49-102 record, the Beaneaters would finish last. An astonishing 66 1/2 games behind the leader. They would also be last in hitting, pitching and fielding. This was also the last year they would be called the Beaneaters. It was Fred Tenney’s second season as manager and what a disaster he oversaw.

This was the first time the Braves had ever finished last. The team had a batting average of 226, a staff ERA of 3.14 and a composite fielding percentage of .947. And amazingly, for the second year in a row, four 20 game losers for pitchers.

Opening day was a highlight however. This is rare. Johnny Bates is a rookie outfielder. At his first at bat, he hits a homer. This is first time a rookie player had hit a home run in his first at bat.  In addition, Irv Young had a great outing pitching. He threw a one-hitter. The Beaneaters won, beating Brooklyn 2-0.

They should have stopped there. Embarrassment only followed for the next six months. 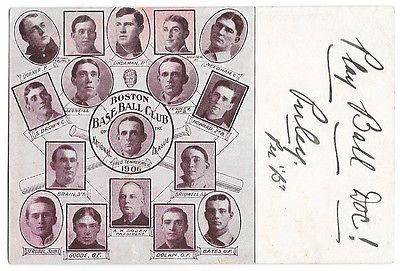