So, Harry and George Wright parted ways from the Red Caps in 1879. Providence, Rhode Island was eager. They were hungry. They decided they could dethrone Boston from the top of the National League.

George Wright was the younger of the two but very talented. He was very popular in Boston. The fans nicknamed him “Our George”. Like most players, he had a price as well as an ego. Providence figured out they could take advantage of that. They wanted to win the pennant.

Providence approach George and he decided to listen. So he bolted for Rhode Island. He didn’t go alone though. He took Jim O’Rourke with him. Jim was Boston’s best hitter.

He also persuaded Lew Brown, a great catcher and outfielder to go as well.

Why did O’Rourke go? He was in a feud with management. He became one of the games first hold outs. He refused to sign a contract. This is how bad it was then for players. He objected to paying $20 a year for the uniform and 50 cents a day for travel expenses. Both sides were suborn and wouldn’t budge. The fans took up a collection to pay for it. O’Rourke left anyway.

The fans were outraged. Who could blame them? They lost three of their best players. And they lost them to an upstart like Providence.

What happened as a result? Providence won the pennant! The Braves ended the season second with a 54-30 record and 5 games behind. 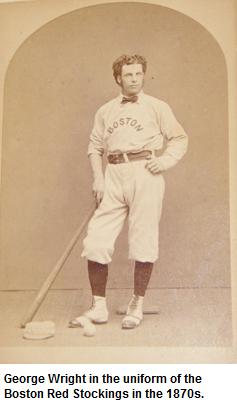