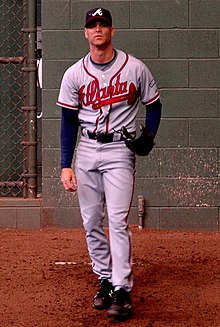 The 29 year-old right-hander, who was acquired in a trade with Oakland in the off-season, grew up near Atlanta and rooted for the local team as a youngster. It is always an honor to play for your home team.

During his 17-season career, Hudson established himself as one of baseball’s most consistent pitchers and until 2014 had never had a season where he suffered more losses than wins. Hudson was also named an All-Star four times: twice with Oakland, once with Atlanta, and once with San Francisco.

Before retiring in 2015, Hudson was the winningest active Major League pitcher, as well as one of four active pitchers with at least 200 career wins. With a win against the Oakland A’s on July 26, 2015, he has won a game against every team in the majors, the 15th pitcher to do so. Hudson is one of twenty-one pitchers in Major League history to win at least 200 games, strikeout 2,000 batters and have a win-loss percentage above 0.600. Of those twenty-one, fourteen are in the National Baseball Hall of Fame.