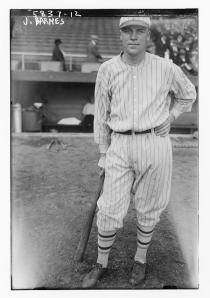 In a matchup at the Polo Grounds on June 26, 1924, Giants’ right-hander Virgil Barnes faces his older sibling, Jesse, marking the first time brothers have started against one another in major league history. Neither of Luther and Sade’s sons will be credited with the victory, but Jesse will be tagged with the loss when New York beats his Boston Braves, 8-1.

The Barnes brothers will match up four more times during their careers‚ the first, including three days from this date.

Jesse began his majors career in 1914 with the Boston Braves. In 1917 he led the National League with 21 losses. On October 2, 1917, he became the only NL pitcher to walk two times in one inning.

In 1918, Jesse was traded to the New York Giants. He had three very good years with the Giants. On the last day of the 1919 season, he won his National League-leading 25th victory, 6–1, over Lee Meadows and the Philadelphia Phillies at Polo Grounds. The game was played at a feverish pace and lasted a mere 51 minutes, a major league record that still stands as the shortest nine-inning game ever played.

Both Jesse and Virgil were teammates with the Giants from 1919 to 1923.