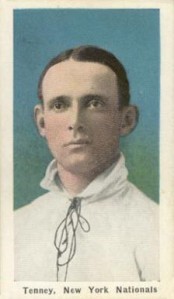 One of the partners in the Braves was James Gaffney. He had political ties with the Tammany Hall regime. That was in New York. The Braves were in Boston then. In 1912 they became the Boston Braves. Politicians who were affiliated with Tammany Hall were often referred to as the “braves” because the Tammany Society was actually named after a Deleware Indian chief. That was the year a profile of an Indian chief replaced the old English B on the team’s uniform jerseys.

Fred Tenney, the manager in 1911, still had a year on his contract. In baseball that seems to be an invitation to disaster. The team had a new nickname. The team had new uniforms. Why not get a new manager then? So, Johnny Kling came on the scene. He had been a pretty good man with the tools of ignorance (a catcher). He came to us from the Cubs and was name the replacement for Tenney. He actually was traded to us as a player and then got promoted. Well, results weren’t forthcoming. We eneded up 52-101 and finished eight, 52 games behind.