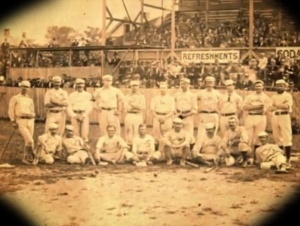 They were a charter member of the National Association which had its first season in 1871. So the Red Caps had been playing together for 5 years already.  The team name was changed to the Boston Red Caps to avoid confusion with the new Cincinnati Red Stockings team. Some of the players from the previous year’s team defected to other ballclubs, so the team finished further down in the standings this season.

The Boston club was initially known as the Red Stockings, because four of its key players had come from the famous 1869-1870 barnstorming team known as the Cincinnati Red Stockings and took the nickname with them to Boston

Harry Wright was the manager and they played the season at South End Grounds I. The first South End Grounds was opened on May 16, 1871. The last game was played on September 10, 1887. The ballpark’s stands were demolished later that month to make way for a new structure.

Lew Brown – A right handed catcher with a .210 batting average. He was only 18 and the youngest player. He led the team with 6 triples and 2 home runs. Lew also struck out the most on the team with 22.

Tim Murnane – 69 games as first baseman who batted left and threw right. The only left handed batter on the team.

Jim O’Rourke – An eventual Hall of Famer with 60 games in left field and the team best 327 batting average. Jim had the most hits with 102. He had the second most doubles with 17. Jim led the with 43 RBI’s. 15 walks was the most on the team.

Harry Schafer – 70 games at third base